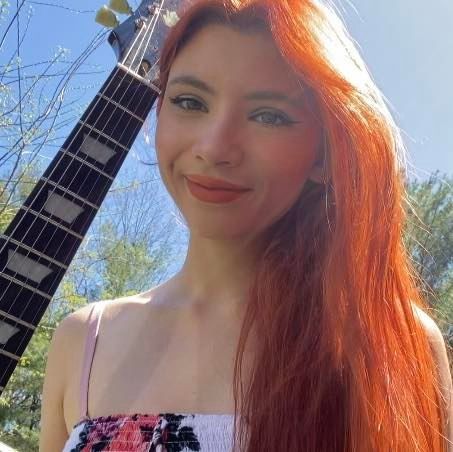 Creating hope one step at a time.

"Shredding for Hope" series to benefit There with Care, a charity that provides resources to children facing critical illness, was the first step in Cait's charity work endeavors.

Where to find music

Join me for my debut show at the Riveredge Resort located in Alexandria Bay!

Cait Devin at The Rail and Canal

Join me at Cacciatore's in Illion NY!

7-10 pm set of acoustic covers and originals + electric lead guitar jams! At these acoustic shows, join me for a variety of alternative pop, contemporary, and rock originals + covers. I would love to see some new and familiar faces! Social media: Instagram: https://www.instagram.com/thecaitdevin/ Facebook: www.facebook.com/caitdevinmusic Website: www.caitdevin.com

Join me for my debut show rocking at FROGS Bar located in Oneida NY! 6-9 pm set.

Cait considers music to be her "core" amongst other passions  such as artwork, acting, and modeling. Though primarily alt pop her roots are in contemporary, rock, and more, exposing her to a wide range of audiences & listeners. At the age of 16 Cait began booking in NYC and Nashville without management, and has gained exposure on KISS FM, iHeart Radio, Wish USA, News Channel 12, 95X Radio, and many more.

Due to suffering from a rare nerve condition, trigeminal neuralgia, Caits story was shared nationally on Spectrum News. Without spreading the word on rare / critical illness, Cait feels as though her work is "all in vain."

This lead to the start of her Youtube series "Shredding for Hope" with Bradley Hall Guitar to benefit There with Care. In total, the series has racked up almost one million views. Some players Cait recruited include Jinxx of Black Veil Brides, Jen Majura of Evanescence, Joel Hoekstra of White Snake, and almost 100 high profile guitarists. Guitar.com featured Cait as "the guitar community's most charitable new player."

One of her most recent endeavors is selling out the Viper Room in Hollywood CA - her first west coast show. Cait is excited to carry on with music and other creative projects, and plans to travel out of Upstate NY for shows in 2023

Many shows are being booked for 2022 the Upstate / Central New York region! Come hang and peep the schedule for some live music - stay tuned for new releases :)

Welcome to my blog!

I'm so excited to share all of what summer has to bring. I guess you could say... I'm VERY excited!! I enjoy talking to my supporters, so hit me up, leave a message! We're in this together! Rock on :)